U.S. Staff Sergeant Duane Hyde has been bestowed by French Consul General in San Francisco, Emmanuel Lebrun-Damiens, to the rank of Chevalier in the Legion of Honour for his service during World War II in Alsace, where he was placed immediately in combat in freezing weather in 1943.

This solemn ceremony took place at the French Consulate in San Francisco on February 12th, 2019, along with Mr. Duane Hyde’s family and close relatives.

The Legion of Honour is France’s highest award and is conferred upon men and women, either French citizens or foreign nationals, for outstanding achievements in military or civilian life.

His military service was sandwiched halfway through his college work. When he volunteered for the Army Reserve in December of 1942, he needed a birth certificate. He was born at home without a doctor so there was none on file. Two old timers in his town helped guarantee a new birth certificate that was satisfactory for the army and he became an American G.I. He joined the army reserve because he was informed that he would be able to finish his college semester but was inducted immediately and off to basic training. His first stop was at Camp Callen near San Diego California for basic training in anti-aircraft. After other stops, he applied and was accepted for pilot training in the Air Force. Surprisingly on April 1st (no joke) he was notified that he would go into the infantry, as they were losing more infantry soldiers than anticipated and they had enough pilots in the pipeline for the present needs. His infantry experience began with another basic training where the 70th Infantry Division was activated in Oregon. In September 1943 he went through further training at Fort Leonard Wood Missouri and refitted with new gear that was not winterized. Higher echelon, even General Eisenhower believed that WWII in Europe would be over by Christmas. He was deployed to Southern France and transported by box car to Alsace France where he was immediately placed in combat in freezing weather, sometimes 20 below. He and his regiment arrived on the front line without any support units such as ; headquarters, heavy equipment, communications and even their Commanding General was still in United States. It was early December with very frigid weather and their new boots were not winterized so frostbite and trench foot became a common occurrence. They realized they were not prepared for the cold conditions.

A memorable incident included his accidentally being targeted by three American 30 caliber machine gunners. This happened after the town of Haganaugh was liberated and he and his platoon set-up a perimeter around the town to guard against a counter attack. The soldiers were told to shoot anything they saw in front of them. A road parallel to their position was possibly mined so they sent him and a jeep driver to determine if the road was mined. To make things worse the American line was not informed that American soldiers were driving the road, bullets with tracers began flying and he and the driver floor boarded the jeep as they entered the range of two more machine guns. Miraculously he and jeep driver were not hit and proved the road was clear.

Another memorable event happened in the Hartz Mountains a couple of miles above Neiderbroun. Our platoon advanced successfully and took over a German entrenched unit protecting the top of the mountain. We confiscated the blankets from dead German soldiers found in the new foxhole. He and two other soldiers huddled together and finally had a good night’s sleep because of the welcomed blankets. In the morning he heard “Go get a hot breakfast” and on the way an 88MM shell exploded injuring he and the two other soldiers. His injury was not life threatening and after the initial surgery he was flown to Baxter Hospital in Spokane, Washington for more surgery and therapy. He recovered enough for limited service and worked as an Army Meat Inspector until his discharge in Tacoma Washington in January of 1946. His significant decorations include ; Combat Infantry Badge, The Purple Heart, The Bronze Star, The Good Conduct Medal and The European-African-Middle Eastern Theater Campaign Medal. 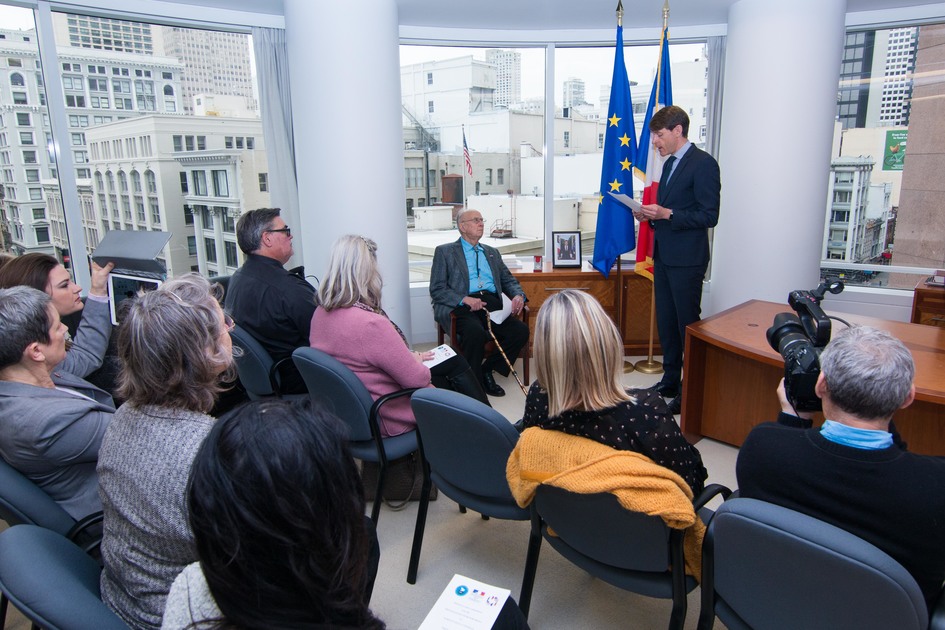 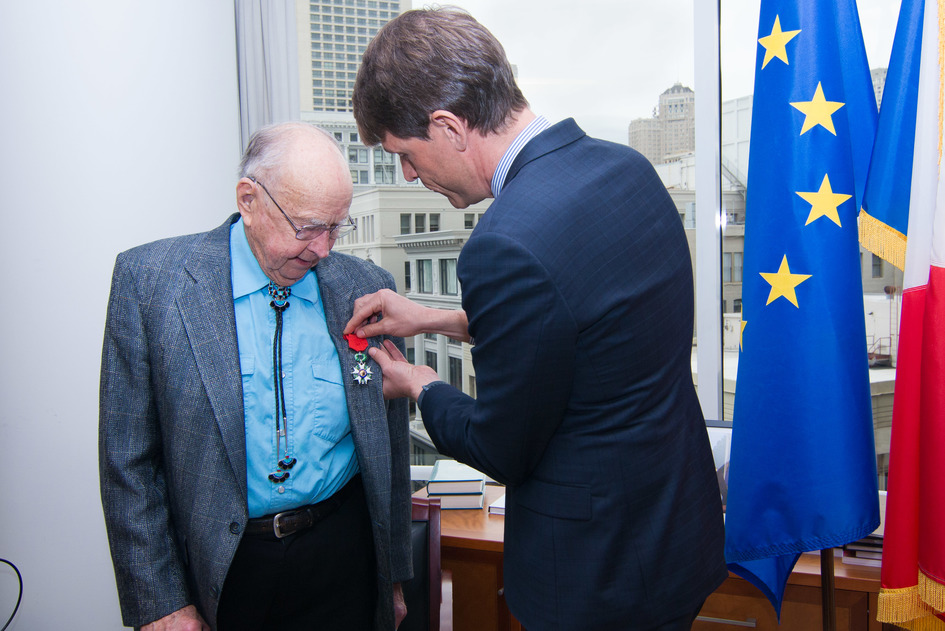 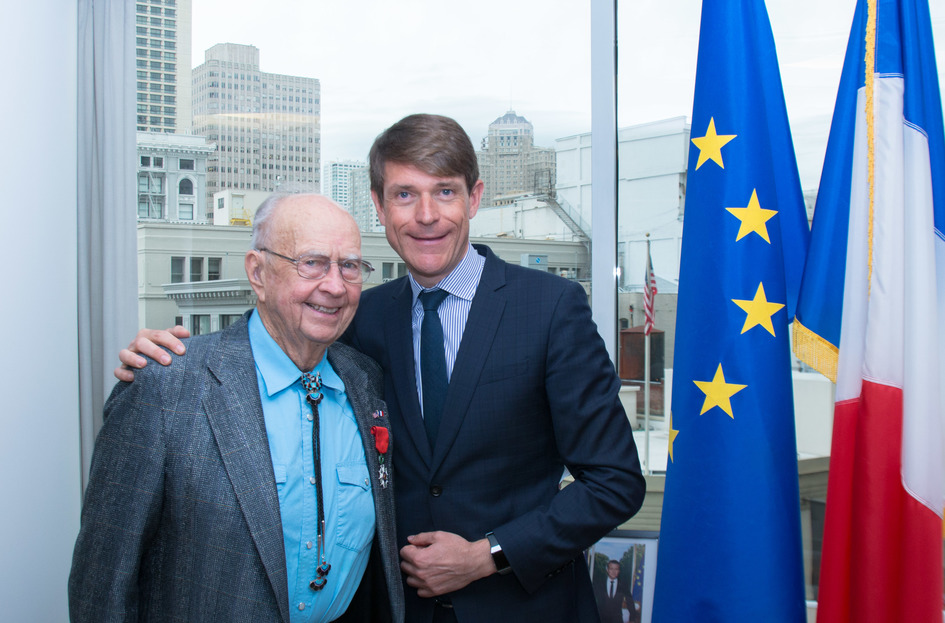 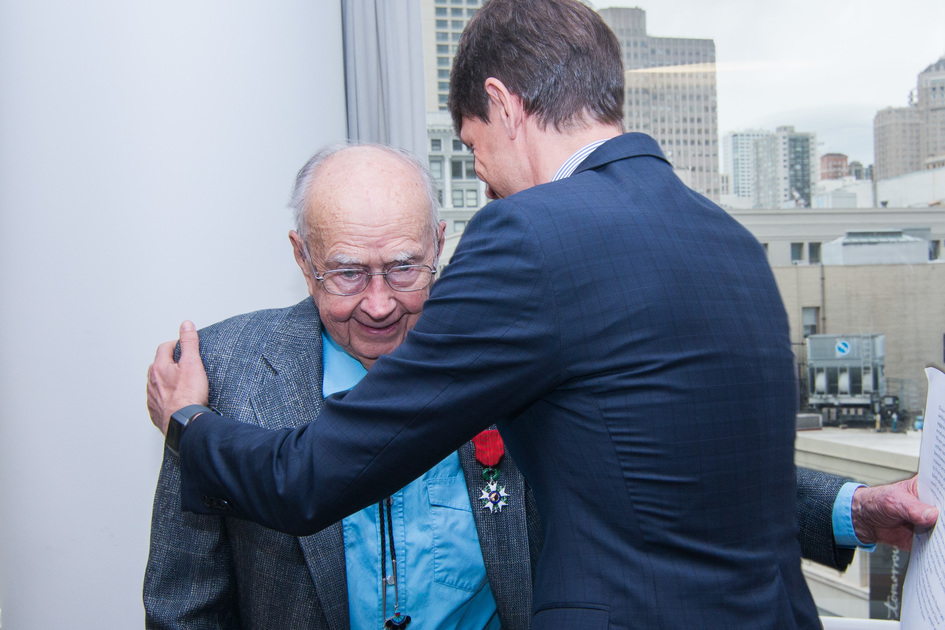