(STAR ADVERTISER) "Three World War II veterans, two of whom served with the 442nd Regimental Combat Team, say they are honored that the French government is giving them its highest medal for helping to liberate the country but add that the decoration also belongs to all soldiers who fought and died there." 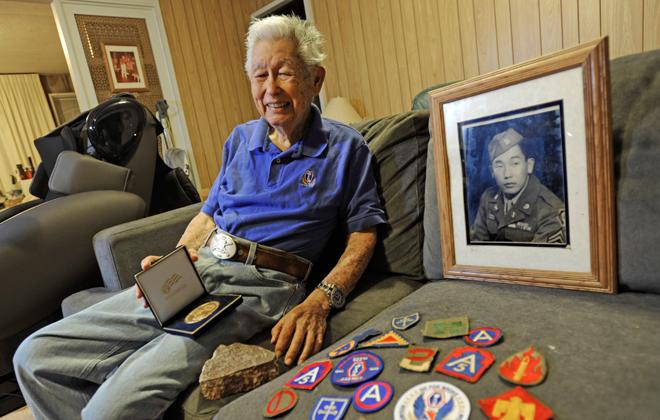 “It’s an honor, but this medal belongs to all the soldiers,” said John Anusewicz, 91, who was a sergeant when he arrived in France with the 492nd Fighter Squadron five days after the Normandy invasion to assist in setting up one of the first airfields for the P-47 Thunderbolt fighter.

“I got goosebumps,” said Anusewicz, who moved to Hawaii three years ago and lives in Kaimuki. Anusewicz was discharged after fighting in Europe for nearly three years, including supporting ground operations during the Battle of the Bulge.

Attorney Pat Lee, honorary French consul in Honolulu, said three soldiers — Anusewicz and the 442nd RCT’s Henry Ishida of Aina Haina and Sueo “Sam” Fujii of Nuuanu — will be presented with France’s Legion of Honor medal and bestowed with the rank of knight Saturday morning at a ceremony at 15 Craigside retirement home.

Lee said the medal also was approved for another 442nd RCT veteran, Fusetsu Miyazaki, of Eleele, Kauai, who died in February at the age of 100. The French government has been unable to reach Miyazaki’s family.

Lee said guest speakers at Saturday’s ceremony will be Lt. Col. Dan Austin, the former commander of the 100th Battalion, 442nd Infantry Regiment — the Army Reserve unit at Fort Shafter that still maintains the colors of the World War II unit; French author, historian and resident of Bruyeres Pierre Moulin; and attorney Steven Edlestein, who has helped other veterans receive the award. 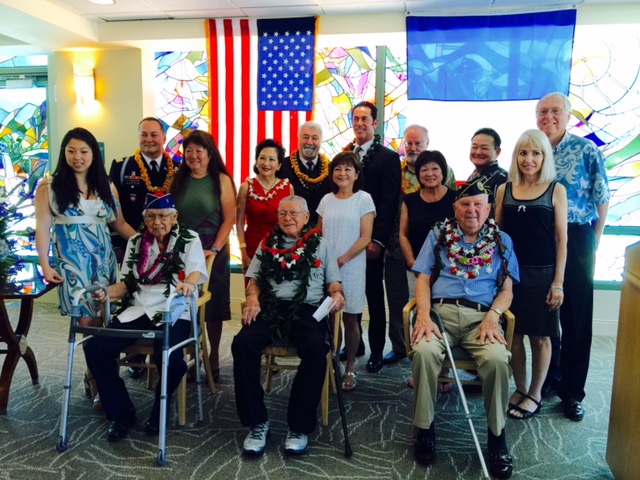 The medals will be presented to the soldiers by Guillaume Maman, who is replacing Lee, the honorary counsel during the past 18 years.

The two other veterans took no credit for themselves during interviews Friday at the Nuuanu condo. Ishida, a member of the 522nd Field Artillery Battalion of the 442nd RCT from 1941 to 1945, said he doesn’t think he did anything to deserve it. But he’s touched that someone would remember what happened so long ago.

Ishida, 94, said he’s accepting the medal in memory of his friends.

His family said Ishida was especially close to another member of the 522nd, Minoru Hirozawa, who introduced Ishida to his sister, Doris. The couple were married for 65 years. Doris Ishida died in 2014.

Ishida, who graduated from Waialua High School in 1939, was among the soldiers who were given the title of “honorary Texan” for being a member of the 442nd RCT, which rescued Texas’ 36th Infantry Division, also known as the “Lost Battalion,” following the liberation of Biffontaine. Ishida’s unit also freed Jewish prisoners at the Dachau concentration camp.

Fujii, a combat medic with the 442nd’s 3rd Battalion, said he is thankful to the French government, which initiated the award.

Fujii was captured by the Germans in 1944 after the battle to liberate the town of Bruyeres and spent six months as a prisoner of war. He volunteered to fight in 1943 after graduating from Kauai High School.

He still recalls that even today, “People in Bruyeres don’t forget all the good things the 442nd did for them.”