Home > A WW2 veteran from Oregon awarded the Legion of Honor

A WW2 veteran from Oregon awarded the Legion of Honor

On January 28th, Corinne Pereira, Deputy Consul general of France in San Francisco celebrated a hero, Francis ‘Dewey’ Tremaine, whose courage, faith and dedication contributed – more than 60 years ago – to defend and preserve the independence of France and to save our common values : Liberty, Tolerance, Democracy. 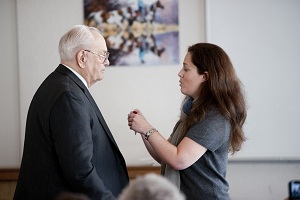 Born on February 24th 1919 in Lynden, Washington. He was inducted in the US Army on November 1942 at only 25 years old. He landed on Utah Beach, Normandy, mid-June 1944 as a reconnaissance staff sergeant with the 208th Engineer Combat Battalion. His first bivouac in France was near Cherbourg. Then, M. Tremaine continued his journey throughout Europe, from Normandy to Germany, building and maintaining roads, bridges, mills, hospitals, and POW camps. He was released from the Army on December 8th 1945. 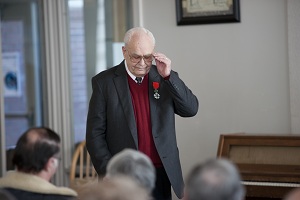 The battles and campaigns ‘Dewey’ Tremaine took part in during World War II speak volumes: Normandy, Northern France, Ardennes, Rhineland, Central Europe. It is really difficult if not almost impossible, to imagine how much courage and bravery it must have required to land on the coast of France in 1944 and to save, as he did, France and Europe from sheer Hell.

To see all the pictures from the ceremony,click here.