Bastille Day was a great success in San Francisco

France celebrates Bastille Day as a national holiday on July 14 every year which was known as Fete Nationale or le quatorze juillet. Bastille Day is celebrated to commemorate the Storming of the Bastille on July 14, 1789. Storming of the Bastille, a fortress-prison which housed many political prisoners, arms and ammunition, symbolized uprising by the oppressed people in France and end of Monarchy in the country.

Bastille Day was celebrated in San Francisco and by the Bay that hold celebrations on a large scale. On the occasion of the National Day of France the Mayor’s Office of Protocol and the San Francisco-Paris Sister City Committee have at the French Heritage Day in San Francisco done a flag raising ceremony with The Honorable Patrice Servantie Acting Consul General of France, on Wednesday, July 14, 2010 at 10:30 a.m. 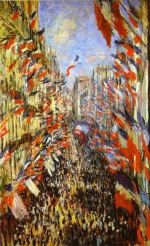 FRENCH KISS: ArtPoints Bastille Day Celebration was held on Wednesday, July 14, 2010 7:00 pm - 11:00 pm at the De Young Museum to toast the storming of the Bastille and the dawn of the modern era with ArtPoint.

Bastille Day at The Café Bastille was a great opportunity to be with French, speak French, or just enjoy a little corner of France in a little alley

of San Francisco. People came to celebrate Bastille Day with good wine, great food and awesome music. Couple DJ’s were playing on the street and the Belden Place. It was full of love for France!!!

The Associations of San Francisco and the Bay Area were celebrating Bastille Day on Saturday, July 10, 2010 starting at 6 p.m. at The Basque Cultural Center, a program of Franco-American music, dance and a raffle (grand prize : a trip for two to Paris courtesy of the Official Committee) were organized.

In celebration of Bastille Day, July 14, Chez Papa Resto in San Francisco offered a 4-course prix fixe dinner menu for $60.00 or $90.00 with wine pairings. They had live music and special cocktails in the spirit of the occasion. Vive la révolution!

At Jillian’s Biliard Club : Jillians was dressed for Bastille Day. They had featuring beer specials and drink specials. Awesome D.J.s were rocking the dance floor. What is Bastille Day without smashing a huge bastille? A raffle was held to have your chance to smash the Bastille from prizes. They had many chances to win. All proceeds from raffle is going to a local Charity. 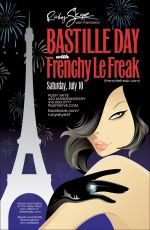 Bastille Day at Ruby Skye. DJ Frenchy Le Freak was spinning tunes all night. The party was Saturday, July 10, 2010 and started at 10 pm.