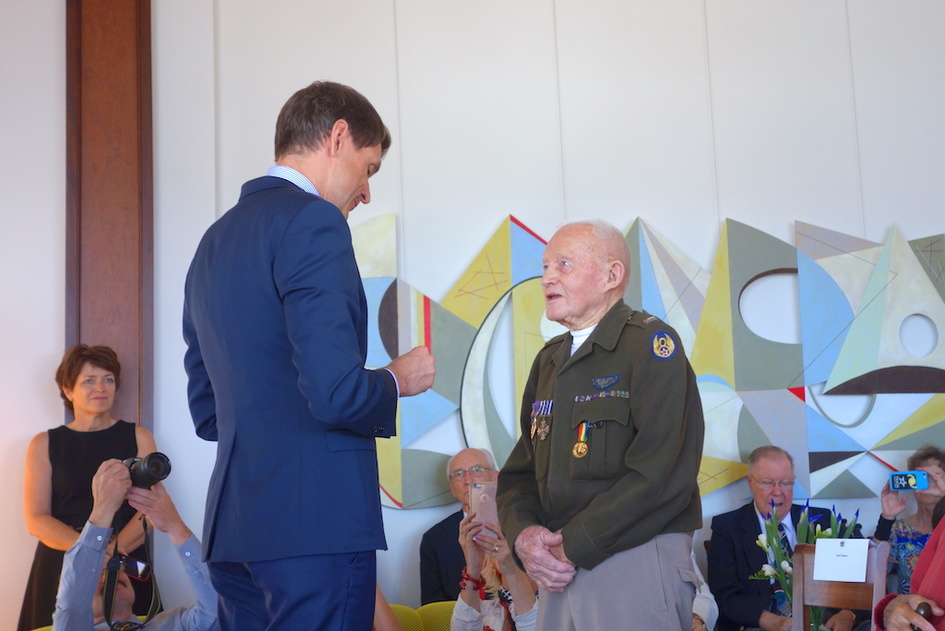 He enlisted as an aviation cadet in the Army Air Corp in 1943. Basic training took place in Brady, Texas; then on to Omaha, Nebraska to learn the crucial elements of navigation and how to drop bombs and hit the targets. Denny graduated 2nd is his class. Denny then went to Alamogordo, New Mexico to learn to be a pilot and a bombardier on B-24 and B-17 bomber planes. While in New Mexico, he was assigned to the 8th Air force, 487th Heavy Bomber Group, and 839th Squadron. On March 1, 1944, Denny began the flight to Europe via a route through Africa to the United Kingdom. Denny was stationed at Lavenham, Suffolk, United Kingdom from April 12, 1944 to December 4, 1944. Denny flew 30 bomber missions over France, Belgium and Germany. Anti-aircraft flak was a continual hazard. On Denny’s 27th bomber mission, he was wounded in the cheek and on Denny’s 30th bomber mission; he was wounded in the arm. During D-Day, Denny was assigned to fly a B-24 on a mission to bomb a German headquarters in Lisieux, France. Denny has been awarded 12 military metals: 2 Distinguished Flying Crosses, 2 Purple Hearts, 4 Air Metals, and 4 Bronze Stars. Denny currently lives in Sonora, CA and has 5 children, 9 grandchildren and 6 great-grandchildren. 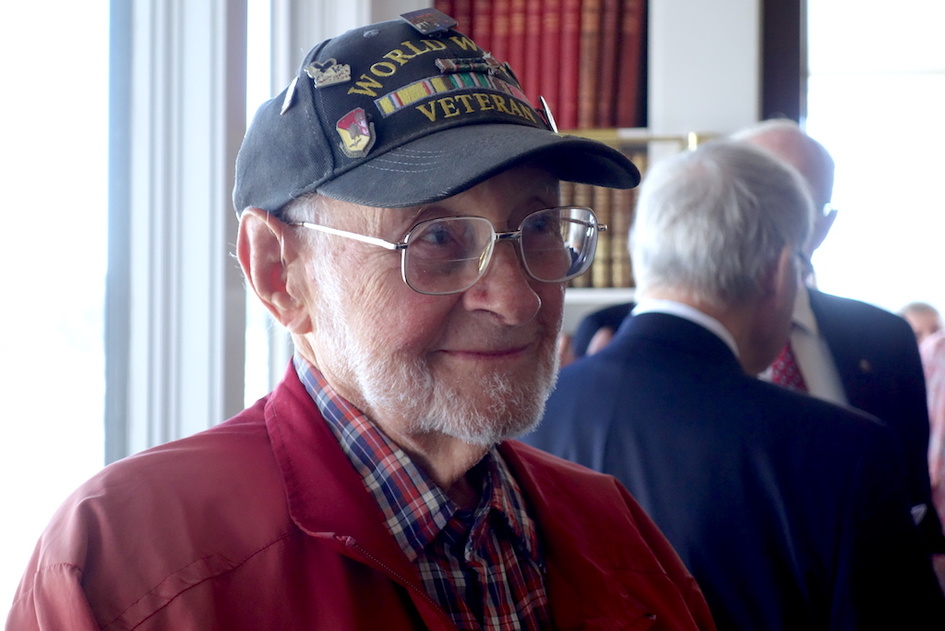 When Army first called for me to enter the service I was given a deferment by the B and O railroad where I was working in Chicago IL. When I found this out I told the railroad to let me go as I wanted to go and fight like the rest of my brothers, so I entered the service. Having had railroad experience I went into the Army Transportation Corps, the 718th Railroad Operating Battalion. I became platoon leader and a drill sergeant, teaching drilling etc. Went to France via Normandy in 1944 and traveled across France, Paris, Loreauville, Bar Le Duc, Nancy, Strasbourg, Luxembourg and Bastogne. Was conductor that took General George Patton’s 4th Armored Division tanks by train to fight the "Battle of the Bulge" for Bastogne and relieve the 101st Airborne Division. On our return trips from hauling supplies we carried French refugees back to France. Returned to the States Jan. 17 1946 and was discharged Feb. 28 1946. Decorations received are three Overseas Service Bars, American Campaign Medal, European-African-Middle Eastern Theater Ribbon with 4 Bronze Battle Stars, Good Conduct Medal, Meritorious Unit Award, and World War 2 Victory Medal. I am living in Santa Cruz CA and I have 2 sons, 2 grandchildren and 3 great-grandchildren.

Staff Sergeant Dan P. Dougherty was born in Hutchinson MN on May 30th, 1925. 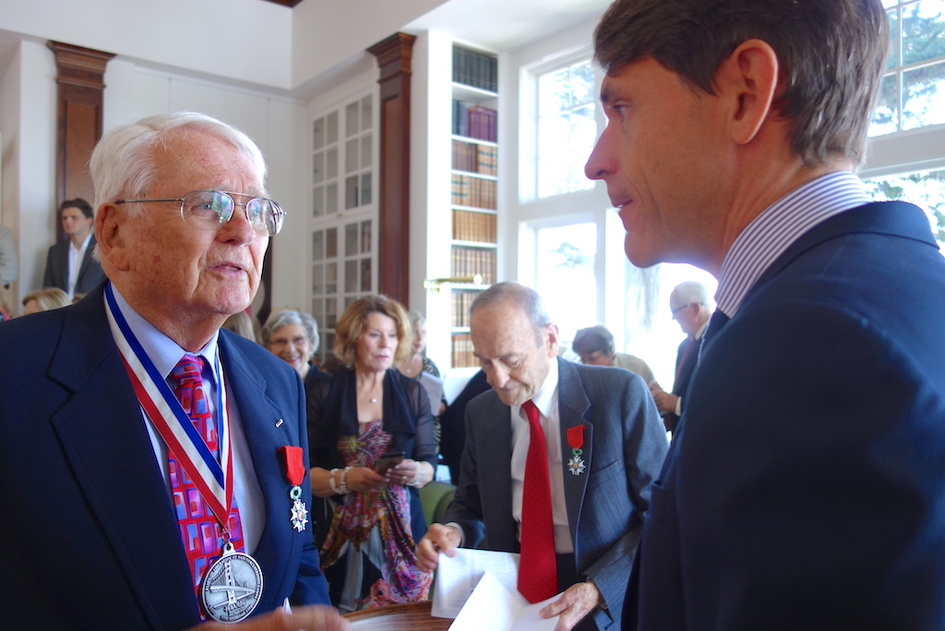 Dan Dougherty was raised in Austin, Minnesota and was activated from the Army reserve upon graduating from high school in June 1943. After infantry basic training at Ft McClellan in Alabama, he spent five months in the Army Specialized Army Program at St. Louis University. When ASTP folded in March 1944, his unit was assigned to the 44th Infantry Division which did its final pre-overseas training at Camp Philips near Salina, Kansas. Dan was a BAR gunner in K Company, 324th Regiment of the 44th when it began fighting in the 7th Army sector near Luneville, France in October 1944. His regiment assisted the 2nd French Armored Division in liberating Strasbourg on 23Nov44. Dan was promoted to Staff Sergeant In January 1945 and transferred to the 45th Infantry Division to help reform six rifle companies that had been capture in Operation Nordwind, Hitler’s last offensive of World War II. He served as squad leader and platoon guide in C Company of the 157th Regiment. Dan was wounded in the Siegfried Line on 18Mar45 and returned to the unit from the hospital on April 2. After the battle at Nuremberg, his unit crossed the Danube and helped liberate the Dachau concentration camp on 29Apr45 where 2,907 of the 31,432 prisoners liberated alive were French. His platoon slept that night in the SS officers quarters and the next day liberated thousands more at the Dachau satellite camp at Allach. The 45th Division occupied Munich for six weeks before moves to the Augsburg area and Reims, France. Dan was discharged from the Army at Camp McCoy, Wisconsin on 10Nov45. Dan served in three campaigns in France and Germany and was awarded the Combat Infantry Badge, Bronze Star and Purple Heart. On 30Apr95, he was honored as a camp liberator on Holocaust Remembrance Day at Temple Emanuel in San Francisco by the Jewish Community Relations Council and the Holocaust Center of Northern California. Dan and his wife Norma have been married for sixty-six years and have three children and seven grandchildren. They reside in Fairfield, California. 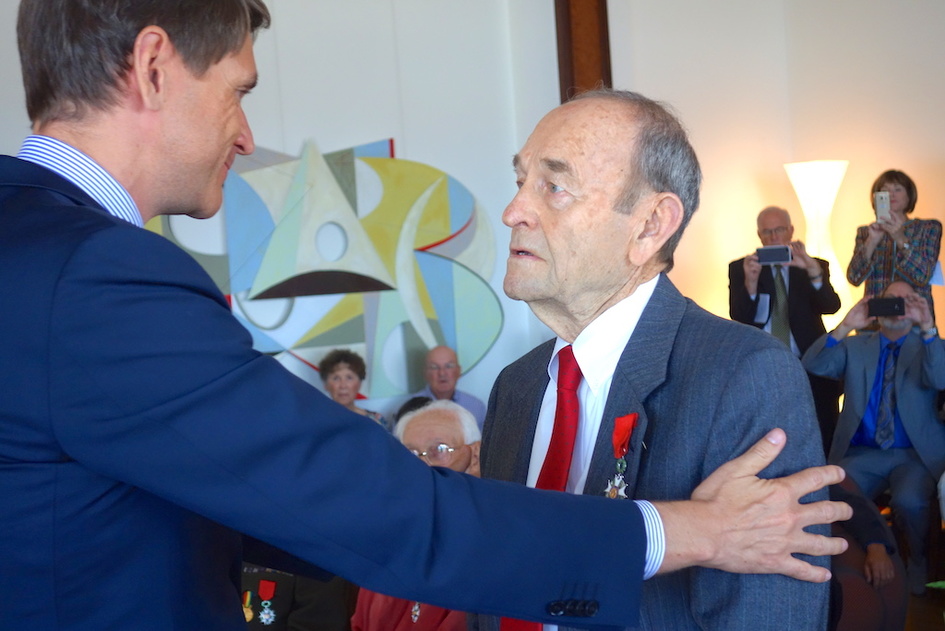 He was a photo reconnaissance pilot with the Army Air Corps, flew missions from France and Belgium, including the Battle of the Bulge, in the winter of 1944/1945. Born February 20, 1924 and raised in San Leandro California, Bob enlisted at the age of 18. He underwent flight training at bases in California, Arizona, Kansas and Oklahoma. He underwent specific training in the P-38 aircraft and was certified as a photo reconnaissance pilot. Subsequently, he transitioned to night photography training in the Douglass A-20 medium attack bomber modified for night reconnaissance. The crew consisted of Navigator George T. Gregory and Observer Tom Nelson. They were assigned as a replacement crew to the European Theater of Operations and sent to the 155th Reconnaissance Squadron, 9th Air force at a former Luftwaffe air field near Saint-Dizier, France on the Marne River, 250 miles east of Paris. Before entering the service, Bob had never been more than 100 miles from San Leandro. Bob and his crew photographed marshaling yards, intersections, roads and river crossings in accordance with targets selected by Army Intelligence. On return to the base, the films were immediately developed, studied by Photo Interpreters and transmitted to a fighter bomber squadron for target selection the next morning. The squadron moved to Belgium, Holland and Wiesbaden, Germany as the Allied Forces progressed into Germany. Bob flew 19 missions. 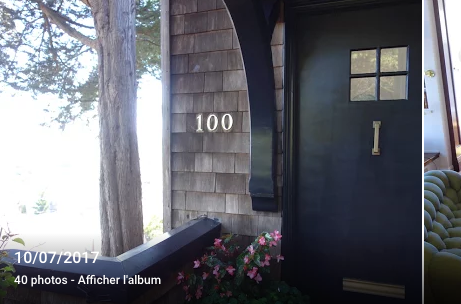